Operating across 36 countries and in 111 cities, Uber is a technology company which provides an on-demand service, connecting people looking for a ride with drivers that are nearby.

Melbourne’s General Manager, Simon Rossi, explains how the idea was born by US-based founders Travis Kalanick and Garrett Camp, when they were leaving Paris’ Le Web conference in 2009 and struggled to get a car to take them to their hotel. Wouldn’t it be great to just push a button and call a car? And with that, they went back to San Francisco and built the prototype for the Uber app.

“It was in July 2010 when they put the first car on the streets of San Francisco”, explains Rossi. “It was made available to just a small group of friends, who could, at the press of a button, use the app to book a car. Travis was then getting emails from friends and friends of friends saying, “Hey this is great; how do we get access to it?” From there Uber spun off to where the company is today”.

Having worked with a number of startups in the past, Kalanick and Camp put the first round of seed funding in, and after six months did their first stint of capital raising. Six months later they did a second, and then a third. It culminated in 2013 with Google placing a large investment behind the brand.

In Australia, Uber launched in Sydney in November 2012, with Melbourne following in March 2013 and Brisbane most recently in March of this year. Its products include Uber Black and Ridesharing. The former is “a luxury, on-demand service”, explains Rossi. “We partner with VHA registered vehicles or hire cars which have a driver certification and are registered with transport authorities in each state. These are luxury cars owned by small business owners that have their own clients and operate with Uber in their down time or in weekends when they don’t have a lot of work”.

‘We don’t employ drivers and we don’t own our own vehicles”, says Rossi, which is why stringent processes exist to vet potential drivers who wish to operate under the Uber platform. For its Ridesharing offering, all drivers must be at least 25 years old, have a full driver’s licence in the appropriate state they’re operating in and their vehicle must be built in 2005 or be newer. In addition, all drivers are background checked with Australian Federal Police and state road authorities.

“Providing the driver doesn’t have a criminal record or hasn’t lost their licence for drink driving or anything else, they’re given a test by Uber, to check their knowledge of the city they live in so we can assess whether they know their way around well enough to be a driver”, adds Rossi.

Once approved, drivers are required to have third party insurance and Uber provides liability insurance of $5m per incident for every car that comes on to the platform. “We also have mechanisms in place that provide the capability to do regular checks against criminal backgrounds as well as with state road authorities”, says Rossi.

Although unable to share revenue figures, Rossi explains that since 2010, Uber has grown a workforce of roughly 600 office-based staff members around the world and has covered millions of trips across their network, spanning the different services they offer. The majority of each fare goes to the driver, although Uber provides the lead and takes a small commission from every ride.  The company prides itself on providing choice to consumers for alternative transport options. “We’re one of the first organisations, certainly one of the biggest who are doing this on such a large scale”, says Rossi. Best of all, for Ridesharing, each trip is roughly half the cost of a regular taxi.

Surprisingly, Uber hasn’t invested heavily in marketing; instead, much of its business comes from word of mouth endorsements and partnerships with a few carefully picked events. For example, at the Melbourne Grand Prix, Uber partnered with Johnnie Walker’s ‘I’m Not Driving’ campaign, encouraging Aussies not to drink and drive, by Uber providing free rides home from the Grand Prix. They also recently partnered with Virgin Australia Fashion Festival, providing free rides for patrons who signed up to Uber at the event.

Whilst recognising Uber’s position at the bigger end of the startup scene, Rossi still considers the business very much a part of that community, and it’s why they’ve partnered with Startup Melbourne. “Anywhere we can provide insight, help other startups out, be part of the community and get together at events – we’re open to it”, he explains. Uber’s main goal is to provide a convenient, reliable and safe choice, positioned at the right price point for consumers’ needs. “We’re challenging the status quo and providing a new way of getting around the city”, says Rossi. The message is clear. Get on board, Melbournites - before you get left behind.

14 ways to regain your focus

STARTUP SPOTLIGHT: WHERE TO TONIGHT? 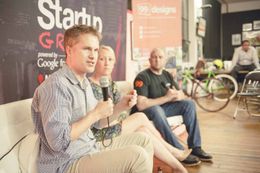