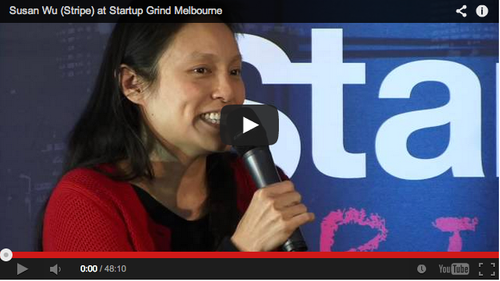 Investor and adviser, Susan Wu, has worked on the early developments of some of the most revered consumer technology startups, including Twitter, Square, Findery, Canva and Jawbone, amongst others. Having recently relocated from San Francisco to Melbourne, she now heads up the Australian arm of Stripe – a service that makes it easier to process transactions online and through mobile apps. A venerated hacker and entrepreneur, Wu was named as one of the "100 Most Creative People in Business" and the "Most Influential Women in Technology” by Fast Company. The San Jose Mercury News also proclaimed her as one of the "10 Most Influential People in Silicon Valley".

By her own admission, Wu confesses, “I got into tech accidentally. Someone in my high school introduced me to BBSes (Bulletin Board Systems) and I thought it was super cool that I could start talking to people around the world”. A BBS is computer system software, accessed over a phone line, using a modem. Allowing users to connect and log into the system, BBSes would give people them the freedom to contact other users via email, public message boards and private chat. Having enrolled at Boston University, Wu “got a job at the computer lab at school. I taught myself how to program so that I could start building MUDs (Multi-User Dungeons), which were text-based multi-player online games, like text-based versions of World of Warcraft or Minecraft”.

With a keen in interest in philosophy and cognitive science, these games allowed Wu to experiment with the complexities of human relationships. For example, “If I take a group of people in an online community, give them ownership rights to the virtual land or voting rights to determine their governance structure – how does that impact their growth? And health of their community? How does it impact how they think of their citizenship in that world?”, she explains. Still very much the same issues she’s interested in today, Wu is curious about how people think and how the kind of ideas we hold in our minds (first principles – those ideas that we believe are fundamentally true) fare in relation to those ideas we inherit from our specific culture’s belief system.

Thinking in this lateral way, Wu believes, is integral for startups. “If you’re trying to create something innovative, you want to be clear on what ideas you’re inheriting from other people’s belief systems and what you’re choosing to believe in yourself. The purpose is for startups to be clear on what they choose to build and who they choose to be. “When I think about creating products, I think what’s fundamental and what’s being socialised?” she adds. “All algorithms are essentially moral constructs. On the surface, Google seems to be a system about organising the world’s information – but according to what principles and priorities? Those are moral constructs they’re passing to us as users of the service. With Facebook, the information they show in your feed is heavily editorialised and prioritised according to their own algorithms, which adhere to Facebook’s beliefs as to what is proper and interesting about how people should organise themselves. And this may or may not agree with how you think about it. Being clear about these things is important to me”, she explains.

Wu prides herself on working with startups who are driven by creative energy to change the world around us and do something they believe in. When Twitter’s Jack Dorsey and Evan Williams pitched to her when she was an institutional venture capitalist at Charles River Ventures, she knew this was something different. “I had the sense it was going to be awesome immediately”, she says. After launching Twitter at SXSW, “there was a constant buzz of activity all around me; even at 3am my phone was buzzing with people from the conference talking about Twitter”.

Two important traits she believes startup founders should have is curiosity and extreme patience. “Don’t think about products in terms of short term objectives. Think about what do I want to do to change this industry? What kind of products do I want to see in this industry in 10 years – and how do I get there?”, she explains.

“I love investing and mentoring startups. Now that I live in Melbourne, I’m personally committed to helping the Australian startup scene flourish”, says Wu. She believes Australian investors are fixated on revenue growth, but companies that focus too early on this make a trade off with creating an optimal product for their users. “A great product”, she shares, “comes from great founders who think deeply about user experience and who want to create sustainable and long-lasting businesses”. 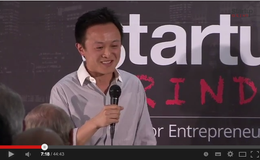