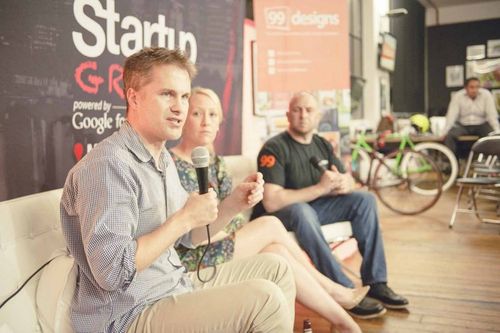 Husband and wife co-founders of Eventbrite, Kevin and Julia Hartz, run a successful online ticketing service, bringing people together through live experiences. Having launched the company in 2006 and with offices in San Francisco, London and Brazil, Eventbrite recently opened an Australian office in Melbourne in March of this year.

From the late 1990s, Kevin Hartz worked as a Product Manager at tech company, Silicon Graphics. “It was the Google or Facebook of its era”, he explains. “You got to see what the web and computing would look like five years+ out. I became very passionate about the prospects for the internet in terms of commerce and communication”.

On leaving the company, Kevin went to work on a startup with friends – offering high speed internet to hotels. “We incorporated the company in April 1998 and had a modest acquisition in October 1998. It got me excited and gave me a little financial backing to take some risk”, he says.

He then turned his hand to angel investing, with PayPal being one of the key startups he worked with. “That was a tremendously impactful experience”, he reveals. “It was a remarkably talented team, the people went on to create LinkedIn, Yelp and YouTube”. His second company, Zoom (a money transfer business) followed and he’s since invested in Pinterest and Airbnb.

Meanwhile Kevin’s wife Julia had a corporate background working in television and had never considered a career in the tech industry. After an introduction to the field by her husband, she says, “I found two things in Silicon Valley that were lacking in Hollywood. Number 1 - Velocity, how fast things move. And autocracy – valuing what you know and what you’ve done over who you know”.

The couple started working on Eventbrite in 2006. “We shared a passion for democratising an industry using technology”, Julia explains. At the time, international money transfers meant terrible customer service and high fees. Ticketing services presented the same problems – which is where the duo saw a gap in the market.

“Live experiences are almost magical (and create) indelible memories. Through live experiences, people connect. The combination that we could use technology to disrupt an industry and do something worthwhile that would change people’s lives was a no-brainer”, explains Julia.

Kevin adds, “We created a simple web form, where you enter your event information. We created ticket types - students as $10 and regular admissions as $30. It was a very simple service; rather than theorising or raising venture capital, we pushed it out to the world and saw it adopted.

We’re in an age where you can push something out in the world and get customers – very inexpensively and very fast. You have to act in a pragmatic way with your first customers – be very customer centric and have the vision to scale it up. We talked to local customers on the phone and Skype to hear what problems they were having. We still do that” he says.

“You can get to a meaningful customer base and get traction before you need capital” explains Julia. “We’ve learned it’s best to raise capital when you don’t need it. You can get the best terms, be the most competitive and get the best deal. We had the fortune of being able to bootstrap the company – we didn’t start growing the team until after 2008, after we’d raised money from friends and family. Results-based capital raising is best as it’s so important to have the upper hand when going into those negotiations. You should be focused on gaining traction and seeing results before you go looking for capital - otherwise it’s high risk”.

And how did they achieve traction?

“We didn’t have any big breakthrough”, says Kevin. “In businesses like Pinterest, WhatsApp or Snapchat, they have extremely steep S curves – 0% adoption to 100% adoption very quickly”. Growth can take place at breakneck paces and the success of apps like these are measured in weeks or months. “Our S curve is not steep”, says Kevin, “It takes a long time and is arduous to build a business – you need endurance and persistence. It’s a marathon, not a sprint”.

The duo set out to build a business that was independent and long term. “When you start out, everyone tells you it’s not going to work and will fail, that what you’re doing is insignificant – we heard that”, explains Kevin. They persevered and built what they consider to be a multi-category e-commerce company – with one platform serving their different customers, whether it’s people taking part in Tough Mudder or attending music festivals.

“Having strength and conviction of your long term vision is very important”, says Kevin. “Don’t get too lost in the esoteric future; do make sure you execute in the near term”. And the most important advice? “Have at least two or more founders”, he reveals. “It can be a very lonely thing and you can go sideways without that support”. Test your vision with your founding team – is your business one that’s going to change the world? Will it have a major impact? What kind of culture will your business have and who will you hire first? Bouncing ideas off a strong founding team can turn your dream into a reality.