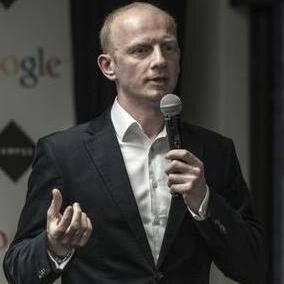 In 100 cities across 42 countries, Startup Grind has made a huge contribution to burgeoning startup scenes around the world. To find out how they’re doing things across the pond, we caught up with London Chapter Director, Marian Gazdik.

Slovakia-born Gazdik has been heading up Startup Grind’s London arm since 2013. A digital entrepreneur with strong international acquisition experience, Gazdik has worked across Europe, relocated to California, and then settled in London last year, organising business networking events. “I don’t like working hard, I like working smart”, says Gazdik. “When I came back to London, I didn’t know many people so thought, ‘What’s the most efficient way of meeting interesting people?’ I wanted to meet the kind of people I could learn from”.

With 18 attendees at his first event, he’d recruited an impressive 320 by his third, by which point he’d been called by the Startup Grind’s CEO, saying “We’ve been to your events – let’s join forces”. He recruited Gazdik as the London Chapter Director, and he’s since landed one quality billionaire entrepreneur speaker after another.

Gazdik’s audience is comprised of a 40% share of startups in the early stages, looking for funding and those bootstrapped and trying to grow; 5-10 investors at each event; and the rest made up of SMEs and major companies like Microsoft, Facebook and Google.

With two basic rules for organising events, Gazdik lives by repeating what works, and doing away with what doesn’t. What works, he says, are upmarket technology events. “There are 60 business networking events happening in London every day”, he explains. “That means there’s over 1000 a month. We’re doing one event a month, meaning we’re just one of 1000”. Competition to be the most engaging, constructive and unique is fierce, which is why Gazdik uses technology to push the limits and give his audience a whole new experience.

“We’re soon going to be the first event in the world using Google Glass on stage. The audience will see on the big screen, what I see through my Google Glass”, he says. People will interact with the event’s speaker by asking those questions via social media and projected through Google Glass, that they may not get a chance to ask in person.

“57% of my audience come to events because they want to listen to the speaker”, explains Gazdik, “and 43% are coming because they want to network and meet good quality people”. But being a natural networker doesn’t come easy to most. As an instructor and mentor for General Assembly (an international outfit offering courses, classes and workshops on the most relevant business skills of the 21st century), Gazdik offers astute and valuable suggestions to budding networkers looking to get the most out of events:

If the prospect of networking makes you feel stressed or nervous, a straightforward tactic that always works is simply saying, “Hi”, with a smile. People at these events want to network and meet new contacts so a friendly demeanour will get the ball rolling. Ask questions and listen attentively. If there’s been a speech, ask them if they enjoyed it, what they thought about the speaker and what really stood out for them in the speech.

For the unconventional amongst you, Gazdik suggests turning the usual introductory questions on their head. If you’re joining a conversation, people are often asking each other, ‘What’s your name? Where are you from? What do you do?’ His advice is simple – disrupt it. “They’re boring questions – I can steal the game and instead of asking people, I can guess their jobs. ‘Wait a minute’, I could say, ‘you’re a horse rider from Brazil, right?’”. Something out of the ordinary like this relaxes people, and makes them laugh – it’s an ice breaker.

A crucial part of networking is remembering names. Not only will it help you make introductions between people but remembering their names will endear you to others. For example, “If you meet a ‘Chris’, all you need to do is remember the first ‘Chris’ you ever met or the first ‘Chris’ you can think of who’s a celebrity”, explains Gazdik. “It just has to be anyone who has the same name. Now take the image you have of this person and imagine them standing next to the ‘Chris’ you’ve just met”. It’s a very simple visualisation that takes just a second – and it really works”.

4. Find the heavyweights in the room.

As humans we’re always building social circles”, explains Gazdik. “Each circle has a leader and anytime you go to a big networking event, you can immediately see by the body language who the leader is of that event. People subconsciously want to associate themselves with the leaders. In fact, anytime I go to a networking event I’ve not been to before, I find the organiser and introduce myself. I tell them something about the event that I like – it must be a genuine complement, and explain that I just want to say hi and it’s my first time here”.

It should be a short, quick conversation – an introduction whereby you can succinctly explain what you’re looking for and ask if there’s anyone at the event that they think you should meet.

“There are several things going on by saying hi to the organiser”, says Gazdik. “Other people have no idea I’ve never met him before so they might assume I’m a buddy or acquaintance – that gives me instant value by association. Secondly, important people tend to be around other important people, so chances are, they’ll come to say hi and he’ll introduce me. He can also tell me who the key people in the room are. That way, I don’t have to spend time meeting everybody; I can be more focused. More than 50% of the time, organisers will offer to personally introduce you to someone else – and that kind of introduction is invaluable”.

As for what’s in store next for the London Chapter, Gazdik hints at a potential Guinness World Record attempt and a partnership with renowned entrepreneur, Sir Richard Branson. Lofty aspirations but not at all surprising from the man who’s made Startup Grind London the success it is today.

To find out more about Startup Grind London, visit http://startupgrind.com/london/

IT'S A DEAL- IT'S A STEAL! AUSSIE COMMERCE SHOW US HOW IT'S DONE

FAILING AS A PARALLEL ENTREPRENEUR