"Marvellous Melbourne" a phrase coined by English Journalist George Sala in the 1800s still resonates today. Sala described a vibrancy and a unique cultural experience of a city alive and immersed with then Gold Rush fever and of it's inhabitants from all over the globe working together. The Victorian era in which the Gold Rush peaked saw Melbourne rival London and become the world's richest city. Melbourne then gave us it's fine Universities and Institutions along with the Federation and Birth of a Nation from the banks of it's Yarra River. All the while giving rise to a wonderful melting pot of cultural attache's from around the world sharing ideas, experiences and knowledge to form the cultural backbone of the contemporary Melbourne we know and love. Much has changed since these times - with wars, depression and industry coming and going - the light of Sala's Melbourne may have dimmed but it never went out. Something is again in the air that has not been felt for a very long time. Something has shifted back to its true compass point in this town. Amongst the cobbled laneway streets, cafes and the cracked brick terraces a new movement is taking over the historical responsibility left to them by their city forebears. Across the city right now is the wonderful vibrant embrace of tech and entrepreneurship. In Garages, in cafes, co-working spaces, University eateries and even the factories that once closed with industry are now open for business once again (in tech). Melbourne is dreaming again. And that which is more, the ideas of the few are attracting the many to take notice from across the world. Now those Journalist's charged with filtering and mediating the city's consciousness will say it's very exciting - but not quite as exciting as the last cultural movement. However, in my opinion right now is just as important and poignant in this city's life as anything else that ever came before.

It's no surprise to me that Zendesk have their regional operations centred in Melbourne. Start Up Grind meet ups continue to draw bigger and more diverse crowds. Pozible has given us a Crowd Funding site with a global ambition we can all be very proud of. Podzy is world's first totally secure client side on-site alternative to dropbox. Our local collaborative consumption Start Ups continue to push the boundaries of how we all can share through technology. I am also optimistically excited to see how far the work of 121Cast and their new creation Omny (a big step in personalised radio) can go. 99 Designs and it's origins in SitePoint is already a successful darling of this town. Patrick Llewellyn speaks of Melbourne's educational institutions and cultural centres naturally lending themselves to being a wonderful global start up hub for innovation and entrepreneurship. He's right. Education is Melbourne's biggest service export representing 35% of our GDP and a AUD$4.36bn industry. Melbourne is the only Australian city that has two Universities in the World's Top Ranked 100.

Right now, there are many Melbourne Start Ups in the concept to seed stage that have enormous potential. Our biggest challenge is the execution of the ideas. Someone once said "innovation is rewarded, but execution is worshiped". The ecosystem for Start Ups in this town are finally working well together and in unison with common goals on executing the ideas with efficiency and purpose. The private equity is beginning to catch up to the current level of quality deal flow. It's evident to me Melbourne is on the precipice of our greatest chapter as a City.

Welcome to Start Up Melbourne!

Geoff Stooke is Founder and CEO of Modern Risk Solutions. I wanted to share this because I love to see such pride in our city and to announce the launch of our linkedin group. Thanks Geoff!

THE KINDNESS OF ANGELS 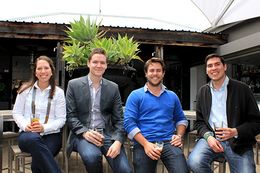 STARTUP SPOTLIGHT: WHERE TO TONIGHT?