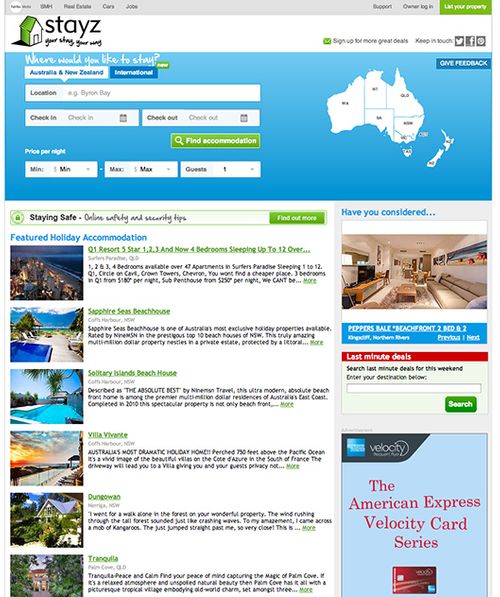 The first time I heard about AirBnB, I thought wow that is exactly the same as Stayz (here in Australia) , with one big difference we didn't think big enough!

Stayz has been around for years, I have used their service. It allows you to rent a holiday house, apartment or hotel room directly from the owner, AirBnB does exactly the same thing only they thought global from day one.

Stayz should be 5 times the size of AirBnB by now but they are not.

In fact listening to stories from people that rented an AirBnB property I think the Stayz model is superior in the fact you pick the keys up from a third party rather than from the owner, because the last thing I want is a hard word from the owner about keeping everything in tact at the start of my holiday.

I think that Fairfax failed to capitalize on the opportunity after purchasing the business from Chris Sharkey. Perhaps just a nice addition to the portfolio rather than a mechanism to disrupt an entire global market?

You see in a recent  report about the Australian Entrepreneurial ecocsystem by Deloitte it found that as Australian's we just don't think big enough. We are not as ambitious as our American counterparts, we focus on niche markets rather than global game changers.

Now this is not an article about having a dig about Australians, quite the opposite. This is an article simply to highlight a pattern in behaviour, because only by identifying such behaviour can 'we' change it. This is a moment of clarity, this is group therapy.

Now is the time to look at your business, and create a vision ten times bigger than what you originally planned. We need to put this tall poppy bullshit behind us, and celebrate success!

My advice to all startups - (and this is my startup resoltuion for the month) Refrain from telling people that their startups are the same as xyz, a lot of people have similar ideas, but that does not mean they should stop before they start - it is vision, hard work, and determination that will determine the winner. That and a great product correct? (Not even necessarily a better product sometimes).

So...If someone has a grand plan, don't try and shoot holes in it - give positive feedback. Tell them you believe, tell your wife it was a shit idea if you feel that way when you get home - jk : )

It's time to think big! Change the world.

14 ways to regain your focus

PAY WITH YOUR FINGERPRINT